If you develop for both Android and iOS you’ve probably noticed quite a few differences in the publishing process.  One of these differences is the fact that Google let’s you upload a video on Google Play along with your screenshots to help potential customers decide if they want to download you app.  Even Amazon allows developers upload a video on their app store.  Strikingly, Apple has never allowed video, only screenshots.

This has all changed since Apple’s announcement at WWDC14.

It’s awesome that Apple has finally joined the video revolution.  But you know in predictable Apple fashion they have put quite a bit of regulation on their ios app previews.  We have a ton of experience with these videos, so let’s take a look at the new ios app previews and how to use them successfully.

There is video on the App Store…now what?

When is the last time you published an app on the App Store without uploading the best possible screenshots? Now that video is available as well, you definitely won’t want to skip this step.  That’s because customers really do want to see what your app is like before buying.  Video gives potential customers a warm and fuzzy about downloading that is only surpassed by actually trying it. Video goes beyond the pretty screenshots to actually show off the slick UI, Gameplay, and mechanics of your app, and most of all, what makes your app so special amid the multitude of competitors.  Another cool thing about having an effective video on your app details page is the fact that your customers will know almost exactly what they are downloading before hand, so you’ll end up having more of your customers stay with you’re app and stay with you as a developer.

If you missed WWDC14 you can check it out the entire WWDC14 conference  when you get a chance.  In the meantime, here everything you need to know about uploading your app preview. 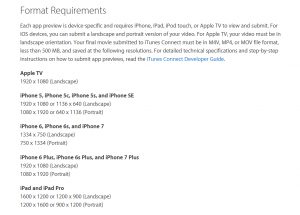 Obviously there are some limitations but Apple does a good job of guiding you to a successful video. Here is a link to the current app preview information from Apple.  Apple gives you 4 main bits of advice:

Although there are many ways to actually create your app preview, Apple does it’s part by providing an easy way for developers to do it.  You’ll need iOS 8 and OS X Yosemite to capture real time footage from your device.

Obviously this is not the definitive solution, and there are many ways in which to capture footage from your device.  But it’s great that Apple rolled out an easy method along with App Previews.  You’re definitely going to want to spend the extra time to make your video, you only have to do it once and it will have a long lasting effect on the success of your app.

Some things to keep in mind about iOS App Previews

App Previews are not meant to be marketing videos.  They’re not meant to promote your app or generate a buzz.  So that means you can’t expect to use the same video on the App Store as you will in your marketing and promotional campaign.  We strongly recommend getting a professional promo or demo video done for your app as well.  This is the video you put on your website, YouTube, ads, and share on social media, etc…Here is an example of what a promo video would be like.  We created this one for Wish.

Although the new App Previews are limited, any video is better than no video as long as the video isn’t terrible (like choppy, laggy, or low res).  This means that developers pretty much need to get to work and create an App Preview that converts as many potential customers into loyal followers.

Some final guidelines from Apple and our thoughts

App Store Optimization now encompasses App Previews.  After Apple reviews and accepts your video, it goes onto your app details page with everything else.  What else is included in app store optimization?  Description, icon, ratings, and screenshots.  (We’ll go more in depth on that in a later post.) So basically, now that video is included in your app store optimization, it has a direct effect on the number of downloads and ultimately your profits.

App Previews are a brand new tool for developers to showcase some of their hard work and creativity right on the App Store.  Although, Apple has put many limitations on these videos, there is still room to create an effective app preview.   Only time will tell exactly what Apple will allow in each App Preview, but people have already started seeing some good feedback from Apple.

You definitely want to take advantage of App Previews from Apple , they will get you more downloads.  But remember, App Previews are not meant to put on your website, to upload to YouTube, or share on social media.  They are not for marketing.  You do still need a marketing video though to generate a buzz, showcase your product, and spread the word.  Follow this cleverly hidden link to our app demo videos and get an awesome demo or promo video fast and cheap.

Feel free to share some of your experiences so far with app previews!

Sorry, no Tweets were found.